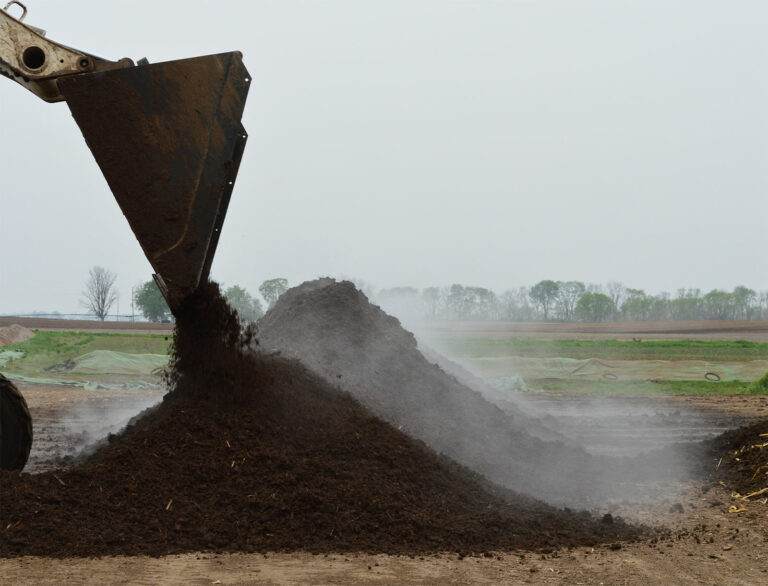 The Role of Microorganisms in the Composting Process

The world that we can see is complicated enough to understand, let alone the parts we cannot see. The average farmers have plenty on their plate when managing the visual aspects of crops, livestock, and land. However, as we start to understand the world, we also become aware of the role that microscopic life plays in balancing life. For example, the role of microorganisms in the composting process is to compost. By better understanding how naturally present lifeforms have contributed to the life cycles of crops, farmers can produce and maintain healthier crops and fields.

Are Microorganisms Helpful or Harmful?

Modern advances in medicine and science have taught us to stay wary of bacteria and the threats they pose. Unsurprisingly though, life is more complex than these basics to keep us safe and healthy. Not all bacteria and microorganisms are harmful to human life—our bodies are teeming with essential lifeforms that help us break down our food and increase our overall immunities to sickness and allergens.

Key bacteria essential to digesting different foods often live on those foods, such as when we eat plants and fruits directly from the garden. Other helpful bacteria get nurtured for these same reasons. Kefir, apple cider with mother, and kombucha are examples of helpful bacterial life that people ingest to improve gut and overall health. About every lifeform needs or benefits from microorganisms that live inside their bodies or on the foods they eat. The same is true for plant life.

The Importance of Bacterial Life in Plants

Bacterial life is crucial to the health of plant life. To begin, beneficial bacteria on plants and throughout the earth around them act as a shield. So long as they’re present, other competitive and potentially harmful microorganisms and vermin struggle to occupy the same niche. Some microorganisms even kill deadly bacteria and those that cause diseases to spread among crops. Besides this, bacteria play a key role in the complete lifecycle of all life forms, plants included. Natural decomposition is the result of the hard work bacteria do.

Microorganisms play a significant role in breaking down organic matter quickly. The process in which helpful bacteria and vermin, such as red worms, recycle matter into fresh soil is called composting. Different chemical compounds are output into the new earth, depending on the microorganisms that contribute to this work. Therefore, certain bacteria supply necessary nutrients to new crops via recycling crop waste and other organic material. Bacteria contribute nitrogen back into the soil through the recycling process, an invaluable resource involved in almost every aspect of plant life and growth.

As noted, the role of microorganisms in the composting process is twofold. First, essential bacteria assist in removing dead matter by reducing it to viable soil replete with valuable nutrients and minerals. The secondary purpose reflects our modern needs; bacteria output vital nutrients and, as such, are cultivated to complement the requirements of different crop species. The former task is helpful to farmers for a few reasons.

The first is the ability to use waste such as the remains of crops after harvesting, grass clippings, and other mundane organic waste that they would otherwise discard. Second, farmers can produce a boon of refreshed soil without seeking third-party products, such as fertilizers. Third, creating an abundance of soil from waste allows farmers to rebuild land affected by erosion due to soil depletion. As new nutrient-rich soil tills into the ground, the entire field refreshes naturally without purchasing and importing chemicals and fertilizing products from external locations. It’s also a wholly organic process that compliments the environment and creates healthier crops for less money.

The second role of bacteria is beneficial to commercial farmers seeking to target profitable crops with specific needs. As mentioned, nitrogen is a key component in plant growth. Nitrogen plays a major role in photosynthesis and the construction of amino acids that form the basis for cellular growth and expansion. However, certain crop species are especially nitrogen-hungry and required extra help to grow properly. Among these crops are familiar staples such as corn, peas, tomatoes, and various greens, among many others. Therefore, the ability to actively boost the nitrogen levels in fields year after year without depleting the land is a vital element in the sustainability of modern commercial farming.

The importance of protecting the structural integrity of fields and the nutritional value of the soil is too urgent to leave up to chance. For decades, farmers have relied on imported supplements and synthetic compounds to inject the needed elements. Composting easily overrides the need for both a repair to erosion and synthetic supplements and manure-type fertilizers. It’s entirely a self-sufficient process that compliments the cycles and seasons of modern farming.

Adding any viable organic material and tending compost will always produce positive and useful plant food and a restorative supply of soil. In replacing synthetic food supplements intended to serve the needs of specific crop species, the necessary bacteria seed compost piles, even on a large-scale commercial size. The process of seeding compost is inoculation. Microbial inoculant products typically come in a dry pellet, powder, or liquid form.

In either case, the necessary colonies which will produce the needed supplements exist in a dormant state. Once introduced to a viable compost that meets the basic needs to support life, the colonies will then revitalize and begin to thrive. The introduced colonies also output the needed supplementary elements and nutrients through the usual process that produces quality compost.

Besides adding inoculants directly to a windrow, they are also highly effective in commercial compost tea brewers. The brewer that works best should include a complete seal to bar entry from wild yeasts and other potentially disruptive microorganisms. Secondly, the brewer must maintain a regular temperature and pressure and have internal aeration functions. Teas seeded by inoculant will brew a thriving culture of the needed bacteria. Also, teas made this way and then dispersed across the field ensure the colonies will live longer and offer more benefits to the crops due to increased vitality.