Why is the Advanced Composting System (ACS) with Aeromaster Turners better than in-vessel composting?

Many in-vessel composting systems are marketed today in wide price ranges up to $15 million. They appeal to some because, being contained in a tank, they suggest hope for odor reduction. But while odors may exist from a preparatory stockpile of feedstock (same at an in-vessel site), once they are part of a balanced recipe aerobic windrow, odors disappear in 48-72 hours.

A second appeal is their claim to reduce composting time. Some systems claim to produce compost in a few days to a few weeks. Their definition of finished quality compost is far different from ours. 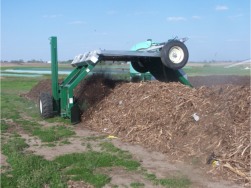 Any system which costs so much must be considered “advanced.” And don’t those system designers have a lot of initials behind their names? But we always believed product quality and profitability were the key issues.

We do not believe in-vessel systems achieve the quality of the Advanced Composting System complemented by an Aeromaster turner. Here’s why:

1. Compare the quality of the finished compost — Compare the results from a complete laboratory analysis, not just by what is not in the compost (pathogens, weed seeds, etc.), but by an analysis of what it does for the soil and plant. Compare germination and growth tests, microbial quality and diversity, aerobic to anaerobic microbe ratios, humus content, the presence of sulfides or sulfates, conductivity, and redox potential. We believe that both laboratory tests and soil/crop results will demonstrate superior product quality using the ACS system.

2. Compare profitability — Learn what an in-vessel system receives for its finished compost product. If it is operating profitably, a closer look will indicate they are doing so based on tipping fees, not by what they receive for their finished compost. The common result is compost that is either given away or sold at minimal prices. Price per ton is significantly higher with lesser results in the end.