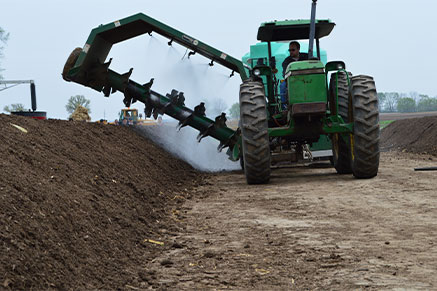 Why You Need To Turn Your Commercial Compost

Composting is an ancient farming technique that has become increasingly popular since its rediscovery sometime in the 70s. However, there’s more to composting than simply throwing organic material into a pile. The reason why you need to turn commercial compost is part of the fundamentals of how the entire process works.

Not all forms of decomposition are the same or even beneficial. Namely, what happens inside landfills and garbage bins can produce dangerous bacteria. Anaerobic decomposition occurs when organic material begins to break down within an oxygen-deprived container. Bacteria that were present on the container or on the material will begin to eat the material.

The result is not helpful compost, but rather a bacteria-laden slime, liquid, or sludge. Composting is a form of aerobic decomposition which requires a regular influx of oxygen to function correctly. The bacteria and other organisms that do the hard work of decomposing material depend on a fresh air supply. Failing to aerate compost results in a prolonged breakdown as bacteria colonies are unable to thrive.

The Benefits of Turning Compost

The main reason why you need to turn your commercial compost is to force air between the material particles. The compost turner parts found among different types of turners introduce air differently. The most basic variety churns compost from the bottom up, ensuring an even influx of air throughout the entire mass. Besides this, compost turners play a crucial role in breaking up material.

Sturdier organic items such as plant stocks are ground between the tines, and the compost is turned. The result is flushed with oxygen and broken down into smaller pieces which will reduce faster.

What Happens When Compost Isn’t Turned

Unless you have a complete static pile system, turning compost is essential. The former uses compost-specializing businesses rather than farms due to the need for sufficient space to run automated air vents that force air evenly throughout windows. Most farms don’t use this system, and compost will thus require manual turning.

So long as the windrow has access to fresh air, at least externally, it will continue to decompose, albeit very slowly and inefficiently. Unfortunately, windrows are also more likely to have an uneven moisture content as well, further disrupting the effectiveness of air and water-dependent life. It’s unlikely that the compost will suffer aerobic decomposition, but this is something to watch out for on operations that use indoor compost layouts or a close container system.